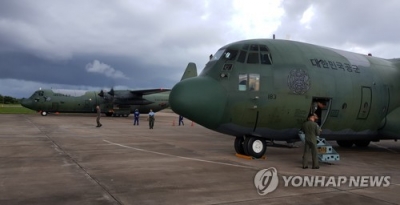 SEOUL, July 30 (Yonhap) -- South Korea will decide whether to provide support for the recovery and reconstruction of Laotian areas devastated by recent flash floods, beyond humanitarian aid, an official here said Monday.

The government has already dispatched an emergency relief team, composed of 15 medical personnel and five support staff, to the villages in southern Laos swept away by floods caused by a nearby dam collapse. Seoul is also offering US$1 million worth of aid.

"(We) will conduct an additional review of whether to end (the help for Laos) with humanitarian assistance or go to an initial recovery or reconstruction state," the foreign ministry official told reporters on background.
Elements considered usually include the receiving nation's relations with South Korea and local conditions.

The ministry will make a preliminary decision first and have inter-agency consultations for the final one, according to the official.

A dam built on a mountain saddle in a hydropower dam construction project in Laos collapsed last week. SK Engineering & Construction, a South Korean firm, is a partner in the project.