These Are the Most Vulnerable Foreign Companies in Korea 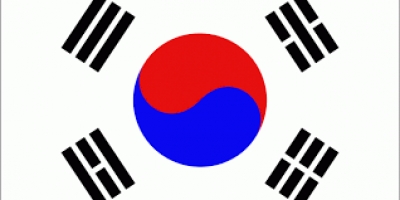 Annual military drills between the U.S. and South Korea this week could reignite tensions after Kim Jong Un and President Donald Trump traded barbs. For foreign firms that count on South Korea for significant revenue, any escalation that curbs commerce could leave them vulnerable.

As the world braces for another round of accusations, here are three charts that highlight some of the companies with the most business at stake in South Korea, according to their financial statements. 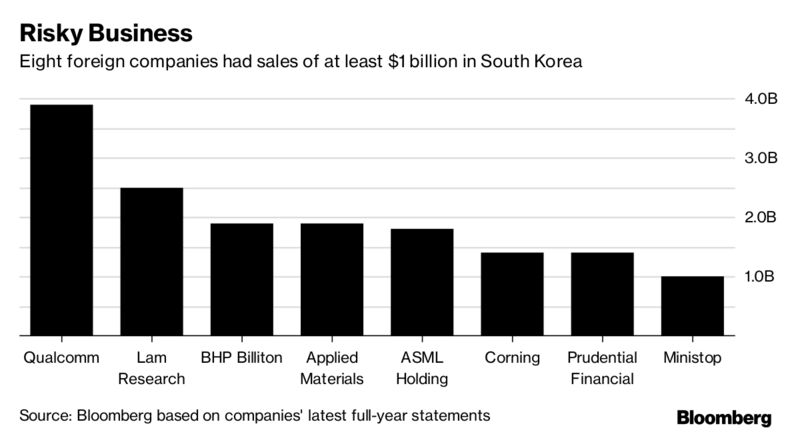 South Korean President Moon Jae-in said last week North Korea was approaching his nation’s “red line.” Tens of thousands of troops from the U.S., South Korea and several other countries will conduct drills over the next few weeks to prepare for a possible war with Kim’s regime. The exercises routinely spark condemnation from North Korea, which said on Sunday it was “reckless behavior” that would lead to the brink of an “uncontrollable nuclear war,” according to news agency Yonhap.

A serious flare-up between North and South Korea would cause a huge disruption to commerce. It would create ripple effects for corporations and the global economy because of South Korea’s importance in the supply chain on everything from smartphones and cars to flat-screen televisions. Companies with manufacturing plants and employees in the country, within range of Kim’s missiles, would bear the brunt of a conflict.

Read about how war in Korea would impact the world economy here.

Not surprisingly, technology features prominently in the list of foreign companies that get more than $1 billion from South Korea. San Diego-based Qualcomm Inc., the biggest maker of chips used in mobile phones, and Silicon Valley semiconductor maker Applied Materials Inc. both get about 17 percent of their global sales from the Asian nation. Europe’s largest semiconductor-equipment maker, ASML Holding NV, derived about a quarter of its worldwide revenue from the country.

“South Korea is a big exporter of intermediate goods, so it’s a huge part of the global electronics supply chain,” said John Davies, London-based global commodities strategist at BMI Research. “If operations in the country were suspended or set back for a long time due to destruction of facilities, that would disrupt the supply chain of companies around the world.”

Representatives for Qualcomm, Applied Materials and ASML declined to comment.

Many other companies are also vulnerable, either through direct investment in the world’s 11th largest economy or as part of the international supply chain. Some, such as U.S. defense contractors, may have substantial sales in the country, but don’t show up on the list because they don’t break out revenue from South Korea.

A conflict would also affect companies that rely on consumers in South Korea. BMW and Mercedez-Benz vehicles were the top sellers among the 225,000 imported cars sold. Starbucks Corp., which doesn’t break out sales for Korea, was forecast to break 1 trillion won ($876 million) in sales last year, according to the Korea Herald. Korea is only the fifth country with more than 1,000 Starbucks outlets.

Among those that disclose South Korean revenue, Fairhaven, Massachusetts-based Acushnet Holdings Corp. benefits from the popularity of golf. The maker of Titleist products has seen growth in South Korea “from across the board," Chief Operating Officer David Maher said in an August earnings call with analysts, in which he acknowledged the geopolitical tensions.

"It’s certainly something that the world is paying very close attention to," he said in the call. "Historically, Korea has been resilient over time."

Ministop Co. shows the highest proportion in the consumer group because the Japanese convenience store chain, which is owned by Aeon Co., has about 2,400 stores in Korea -- more than it has in its home market. Apparel producer Guess? Inc. and Samsonite International SA, whose shares trade in Hong Kong and which added Tumi bags to its portfolio in 2016, have seen revenue contributions from the Asian nation shrinking over the past two years.

“We are not doing anything special under the current North Korea tension,” said Kimikazu Sugawara, spokesman of Ministop. “The company has always been prepared to try the best to continue its service even under tough times.”

Acushnet declined to comment further when contacted over the weekend. Guess did not respond to a request for a comment.

Some of the biggest multinationals don’t make the list because Korea contributes a smaller portion of their huge global business. While fashion giant Hennes & Mauritz AB’s gross revenue from South Korea exceeds that of Guess, it’s still less than 1 percent of the Swedish company’s overall sales.

The nation of 51 million is also headquarters to some of the world’s best-known brands, many of which get a majority of revenue from overseas. Samsung Electronics Co., by far South Korea’s largest company, may get only 10 percent of its $174 billion in sales from its domestic market, but many of its advanced factories are within range of Kim’s artillery. LG Electronics Inc., another choice for home entertainment and appliance buyers, derived a quarter of its revenue from South Korea.

“Essentially all companies doing business in South Korea are bearing with the uncertainty,” said Bloomberg Intelligence analyst Justin Jimenez. “It does cast a shadow and could filter through to investment decisions, hiring decisions.”